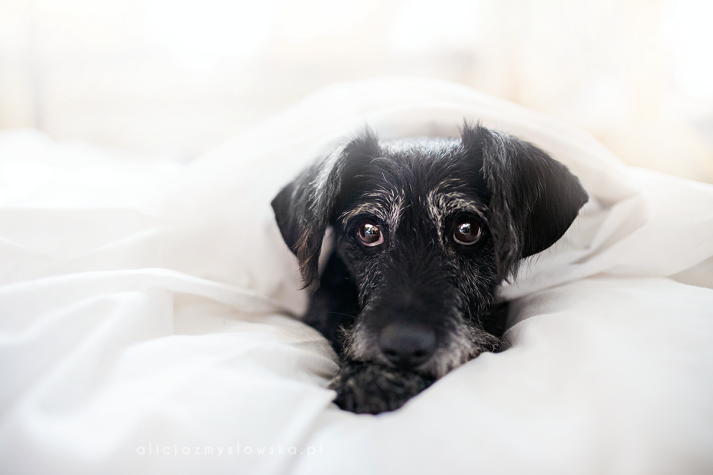 My first dog Yorkshire terrier Alibaba died in October 2009. My Mom could not handle his death for a long time and she did not want to hear about a different dog. On the contrary, I was really desperate to have a new dog to fill the emptiness after Ali.
At the end of December the decision was made; we will have a dog. My parents had very unrealistic vision of a dog after Yorkshire terrier – they made a condition that the size of a dog has to be so small that my grandma has to be able to carry him… My idea was quite different, I saw myself with a GSD rather than some midget.

One day I was looking through the gumtree adverts when skinny, terrier mix captured my attention. That was it! It was one of those instant connections. You have this feeling – I can not really explain what it was. I just knew it was going to be my dog.I called to ask about him and I found out that he was about a year old and to adopt him I have to go through a process which requires pre-adoption visit. I did not even know in what shelter he was.
I run to my parent to tell them that we have a dog. It did not go so smoothly as I had expected. My dad wanted to see other dogs in the local shelter. But I knew I was interested in any other dog. The underweight terrier was mine! Before my parents had agreed I made an appointment for a pre-adoption visit. Thankfully my parents had a meeting with friends that night. It is always easier to talk to them in front of their friends. I am grateful to my aunt who confirmed Gacek’s arrival to our home. She told my parents she is going to be his godmother

The visit was fine, we made it I was informed that Gacek is located in a shelter quite far away from our place. It was not a problem and we wanted to go as soon as possible but the weather was so terrible it was dangerous to drive.
Gladly I found a man who was traveling this direction and I hired him to bring us Gacek The next day I picked my dog up at a parking lot near my house.
The moment I saw Gacek I have fallen in love. This crazy, skinny, black terrier has stolen my heart forever.
The whole family was expecting his arrival. Gacek became an instant favorite of everyone. Although my mam mention that he is a little bit too big for granny to carry him :)

Everything was ready for at home; bed, toys, bowls, leash and collar. Gacek came inside very bravely and he checked every single room. He drunk five bowls of water (the shelter he was at had water frozen due to the low temperature). He had no idea how to use the stairs or what was the television. I remember the first day, he was mesmerized by a soap opera.
He spent his first night cuddling to me despite his terrible smell. I had to handle it because I did not want to wash him straight after he had arrived.

He was a total wreck, with five kilograms underweight, frostbitten, huge ears and terrible fur. He also had a very strong separation anxiety and I was unable to go alone to a toilet,
His past remains unknown. The only thing I know is that he was found tight to a tree and someone shot him with a air gun. Despite his past, Gacek loves the world and world loves him. I have a list of my friends whom I will search in case of Gacek disappearance

He has changed a lot since I got him. Now he is slowly growing up and I can finally describe him
He is very fragile, emotional and he needs to stay close to me. On the other hand he is a hug individual, who has his own opinion about everything. Extraordinary creative and smart. Stubborn and impatient. A challenge for a trainer, he is always ready to work but on his terms. Man enchanted in dog’s flesh. He has a lot of human characteristics, he loves to imitate us and he is surprised we do not allow him to do everything. Gallant and cute. Just perfect!

Gacek is my sweetheart, you can say he is a cofounder of G Team. We were meant to be together. His only had one advertisement before I have called. Gacek is a perfect dog, who is loved by everyone who has ever met him. Sometimes I think there is a tiny part of Alibaba inside him. He also reminds me of Trump from the „Lady and the Trump” cartoon.
Gacek is a dog of my dreams. The best friend I could ever imagine to have. I am writing this article with him near me and every time I look at him, I realize how much I love him and how much happiness he has brought to my life.