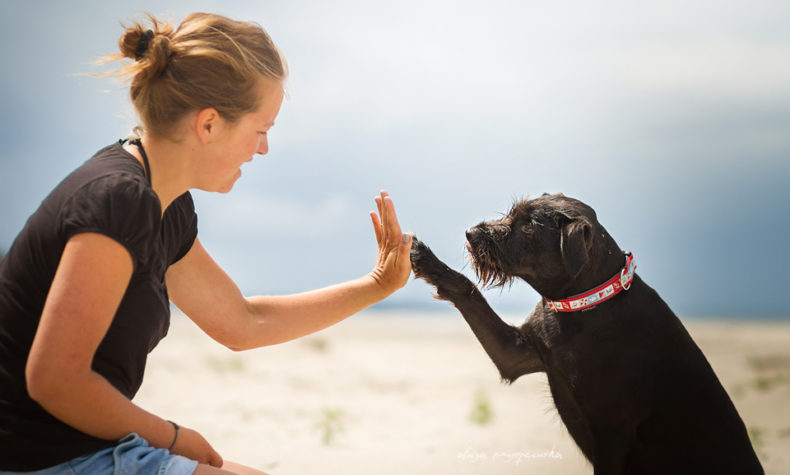 Another situation that shows have we perceived cues is when dog struggles, and we want to comfort him.  We start talking. There is till great video on the internet:

Police officers were doing amazing helping seal trapped in a plastic.  She was obviously under a lot of stress, not knowing what will happen to her, being constrained and surrounded by people. She was trying to escape, tried biting the officers. They on the other hand, wanted to help and comfort her during the time they were releasing her.  So, what did they do?  They were talking to her. They were saying “ok don’t worry”, “don’t be scared, it’s OK”. Those are very intuitive things to do. That’s how we humans communicate. I think those examples show nicely how we perceive communication. How we take for granted that other side understands things the way we do.  It’s often a source of misunderstandings. Because we may have visualization of how we want things to turn out, but our interlocutor can be in a completely different position. Which often is a case in dog training. We rely on our language a lot.

Before we move forward.

It matters how we speak about things what words do we use.  I have recently done a poll on that subject and majority of people use cue instead of command, but I think it is important topic to mention in this article. I consider the training vocabulary important factor of how we perceive dog training.  There is a big shift in the dog training world from using “commands” to “cues”. Command is perceived as something that has been done and never refused, has a military, circus, connotation. Cue is rather a hint, a prompt, the dialogue. If we say a cue and our dog doesn’t respond, it is less likely we say we are disobedient. Command had the effect of what some labels have (check behaviorworks.org about labels topic). It was implying certain approach to the learner, usually involving punishment-based methods.

What is the function of a cue ?

How is all that relevant for dog training? VERY relevant it turns out! We KNOW, step by step, what the expected behavior should look like. We give the cue … and the very opposite happens. But my cue is so obvious and clear, and I know HE CAN DO IT! How many times have you thought that? How many times have you been irritated when the dog did not respond to your cue or responded in a different way than you’d expected? But he KNOWS it! I have in my head what Kathy Sdao once said that in contrast to our learner, we have in our head all the behavior, everything that is about to happen. Lack of clarity and lack of understanding what are the function of antecedents can be a source of errors in training.

Do you remember A-B-C contingency? What causes the behavior to appear?

The CONSEQUENCE, not the antecedent. You do not lift a glass of water because it is standing in front of you, you lift it because a consequence will be quenching your thirst, i.e. negative reinforcement. It is not your cue that makes the dog run to the box, it is the history of reinforcement connected with this exercise. “Cues don’t make the behavior happen, it is the role of consequences”

So what is a cue?

A cue is a Discriminative Stimulus (Sd)

Sd is a change in the environment, which at a given moment increases, (or in the case of punishment, decreases) the frequency of a behavior (or one of its qualities, such as duration, intensity, etc.). Sd has a so-called evocative effect. When a bowl of soup appears in front of you, it is a cue for you to take a spoon and start eating. Sd increases the probability of a behavior occurring at a given moment. The effects of Sd, as opposed to the effects of a consequence, can be observed HERE and NOW. In operant conditioning, stimuli do not appear without consequences. That is why in behavior analysis we have types of Sd as e.g. SD or SdR i.e. discriminative stimulus for punishment or reinforcement.

Sd controls behavior through the history of differentiated AVAILABILITY of a given consequence (punishment or reinforcement). A CUE informs our learner that at this moment, in this context, reinforcement is AVAILABLE for the behavior. As opposed to MO, (motivating operations, which are also stimuli preceding a behavior) which inform about the VALUE of the reinforcement or punishment, not just their availability.

Why are you not answering the phone at this moment?(I assume you aren’t) Because it’s not ringing. This is what we call stimulus control. Why does your dog not circle any cone ore tree in sight? Because there’s no stimulus which might inform him about the availability of reinforcement for this behavior, right then.

If your dog does circle every cone he has encountered, this means you have a problem with stimulus control.  This is very often (but not always) true of what we consider to be problem behaviors. They are not a problem in themselves. The problem is that they occur in a situation when they shouldn’t. There is no stimulus control. “Some behaviors that people in general may call inappropriate are not behavior problems per se. the problem is emitting this behaviors at a time or in a place or circumstance that is deemed inappropriate by others. This represents problem of STIMULS CONTROL! Not a problem of lack of “self control” or “inability to control emotions” John O. Cooper

The cue tells our learner that reinforcement is available, because in the past, in these or similar circumstances, this behavior resulted in reinforcement. What is the likelihood of your dog starting to bring you a scent article in the middle of the night? Probably negligible. Why? Because there is no stimulus to inform him that reinforcement is available for this behavior. And what is the probability that he will bring you a scent article when you are in the training venue? Surely much higher.

All this information will be useful for analyzing our repertoire of cues. We have to remember that it is the learner who picks the relevant stimuli. Even if to us it seems that something is a cue, it may well not be. It can only be verified by the behavior of our learner.

Rarely. The truth is dog training relies a lot on the environment cues. When I say box while my dog is in his bed or while I’m scratching him, the chances that he will stand up and run in the search for obedience box are pretty low. Same when I say distance control cue while my dog is walking on the leash, on the street. This is perfectly fine for me. I don’t need them to respond out of context. We humans have few behaviors under perfect stimulus control either. Lets even talk about our name. Do we respond to our name in every occasion we hear it? Not likely. When I am in a crowd  and someone says my name far away from me, I won’t respond. It would be different if someone said my name standing next or just behind me. 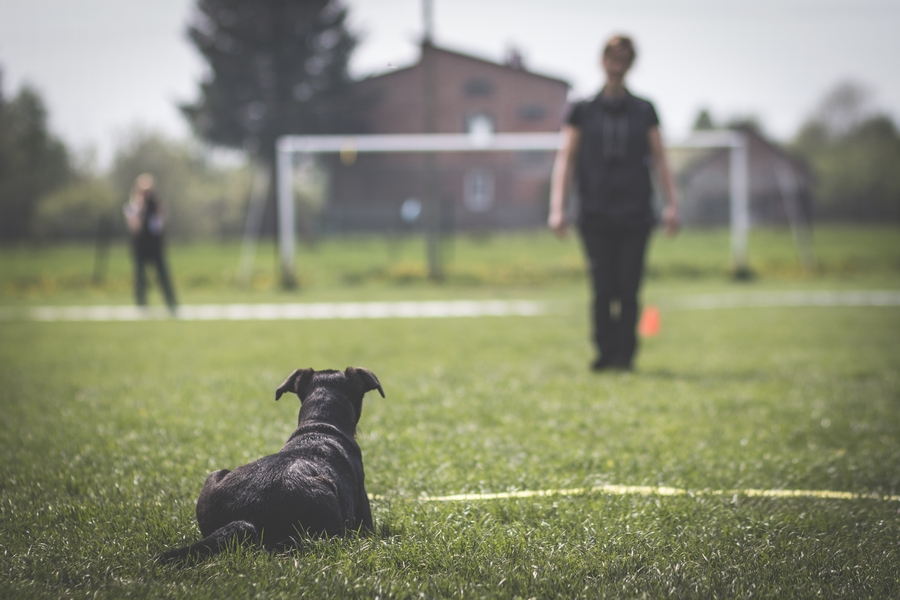 One of the behaviors I consider to be under strong stimulus control is picking up the phone when it rings, when we have specific ringtone. Anytime I hear “Bad things ” by Jack Everett I want to pick up my phone. Even when it’s just True Blood straining on the screen, I catch myself checking my phone if it rings. Why? Because when I heard that song there was a consequence available – conversation.

What do we have to remember when choosing cues?

“IT deosn’t mttaer in waht oredr the ltteers in a wrod are, the olny iprmoetnt tihng is taht the frist and lsat ltteer be at the rghit pclae. The rset can be a toatl mses and you can sitll raed it wouthit porbelm. Tihs is bcuseae the huamn mnid deos not raed ervey lteter by istlef, but the wrod as a wlohe.” https://www.mrc-cbu.cam.ac.uk/people/matt.davis/cmabridge/

I think it’s similar to our long cues issue. There will be a certain part of the cue our dog responds to, part that is relevant.

In the next part of this article we will cover how to add cues, watch some videos examples and analyze why things go wrong sometimes.