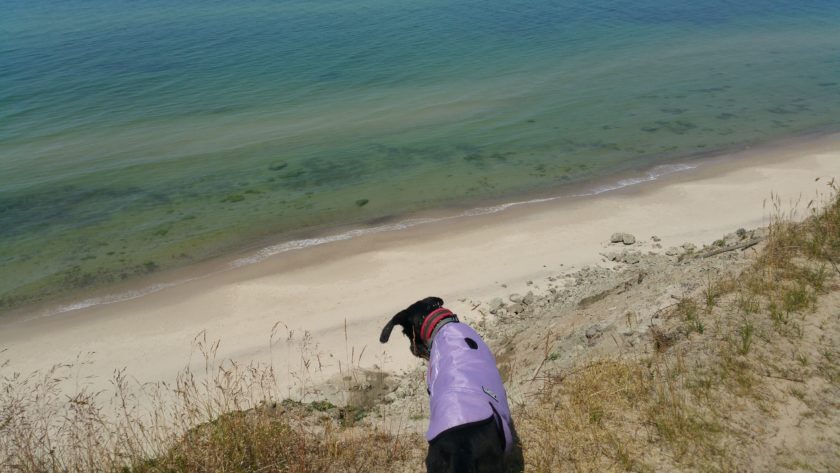 Summer is coming, with sun and warmth we have been all anxiously awaiting (at least I was ;)) In the last July and August temperatures have been know to raise above 30 Celsius. I love heat and sun, I really regret I was not born closer to the equator. So when finally, summer is giving us its best I feel perfectly. It my dogs do not always agree with me. Although, they definitely prefer warm over cold, they are not as big fans of suffocating heat as I am. 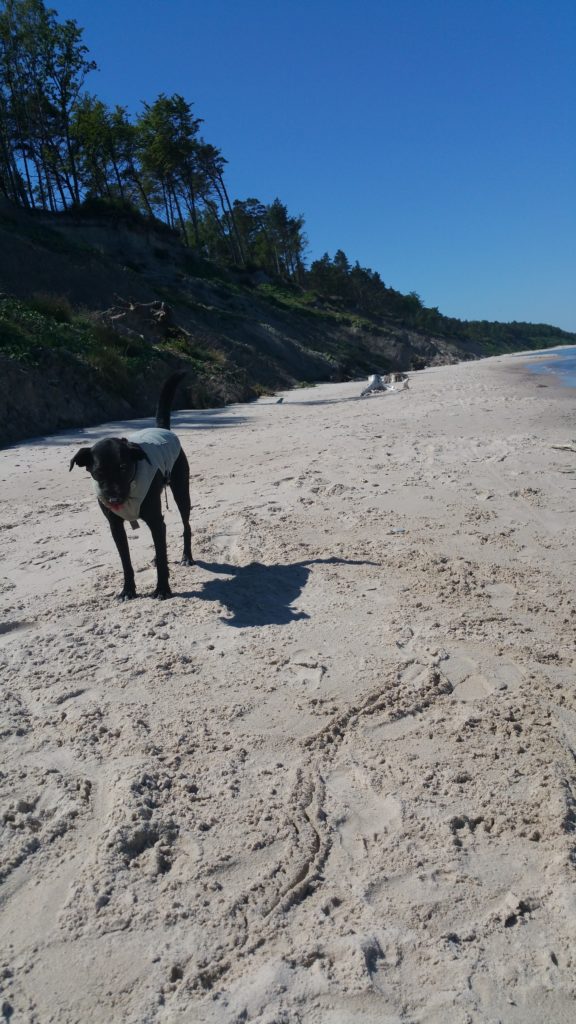 Gunia’s has a short muzzle, she is black and despite her high tolerance for temperature. Any activity is a Herculean effort for her. She breaths hard, drills excessively and she does not want to move at all. Though, she can lay down for the whole day on a burning rocks or on the beach. But any movement is too much for her.

Gapcio is overheating very quickly . The moment sun goes up his activity is deteriorating. What is one of the main reasons he has a break in training during the summer months. June and July are no obedience months. At least without regular training. Though, recently due to his increased work motivation he is more and more active even when it is warm.

Gacek does not care about temperature. He has more important stuff to do in his busy life. So when it is 35 Celsius degrees he is as active as if it was 15. Sometimes I wonder if he does not have self-preservation instinct, he can dig holes for hours or chase sea gulfs even when heat is suffocating.

All these reasons made me buy Ruffwear Swamp Cooler few years ago, when I first saw it. I was quite skeptical when I first heard of it, so I bought only one for Gunia.
It turned to be bull’s-eye. I was surprised to see that Gunia was normally active when she wore her vest. She was behaving as if it was at least 10-15 degrees less. She was playing and I was able to work with her early morning or late evening.

That is why, when I went to the Staes I bought vests for the boys. The effect was the same as with Gunia. It was a salvation for Gapcio’s black fur.

So how this vest works?
– it is made of a fabric that reflects the heat from the sun (all black dogs will appreciate;))
– before you use it, put it in a cold water for a while – the three layer fabric will keep the cold for more than six hours
– because dogs do not sweat on the whole body as we do, the vest creates the effect of evaporation thus mimicking the cooling effect of humans sweat

Pluses Ruffwear:
– KEEPS YOUR DOG COOL
– keeps cool for a long time
– very easy to put on a dog
– has reflective elements
– the fabric is very durable
– easy to „turn it on”
– light and comfortable

Minuses Ruffwear:
– it is difficult to remove Dorset or sand that gets under the first layer
– high price, at least on Poland (it is acceptable in the States) 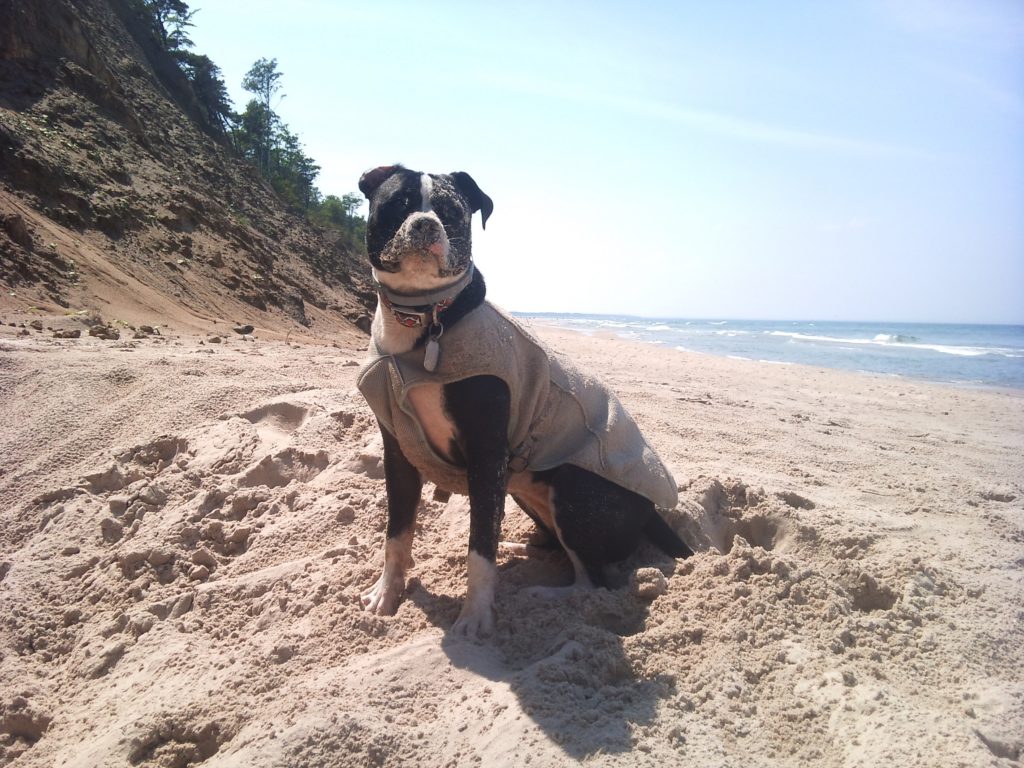 A year ago I encountered a decent deal on Hurtta cooling coats, and decided to buy one for Gacek. I was expecting it to be similar, in quality and efficiency to Ruffwear. I was wrong.
In theory, it should work in the same manner as the Ruffwear one. In my experience it is only a theory. I will sell mine as soon as possible. If I have bought Hurtta’s cooling vest as the first one , I would probably decided not to buy more. I would though that it was a poor gadget and G Team would have never had so much comfort in these hot days.

Minuses Hurtta:
– it cools half the time Ruffwear does
– it gets warm quicker
– the fabric is not so durable
– terrible fit, uncomfortable, Gacek hates it
– difficult to put it on a dog
– the same issue with sand and dirt as with Ruffwear

To sum up, Finns are the best in doing clothes for winter and Oregon company is winning when you want summer gears. 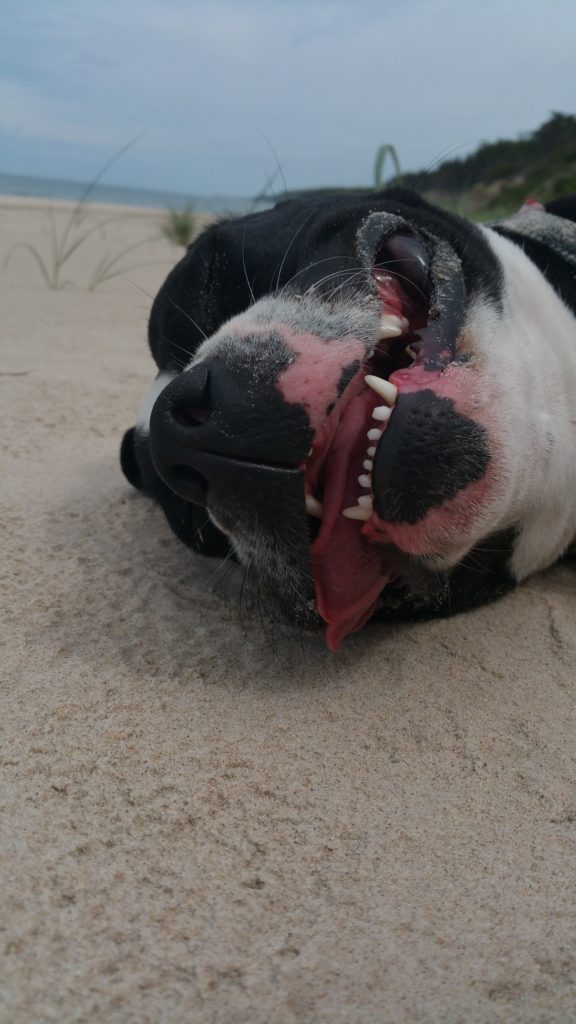